vThe first cream teas were served during summer 1976 at the suggestion of the then Rector’s wife, Mrs Bardsley who proposed the church provided teas in the Church Hall on Sunday afternoons for the many people who visited Dr Smart’s gardens.  The teas consisted of cakes, bread and butter and a cup of tea with scones and cream for 30p or scones and butter for 20p.  The first teas were served on 11th July 1976, and a sum of £58 was made during this first summer.

v The teas were organised by Mrs Glover in 1978 and by Mrs Petifer in 1979, before being taken over by Doris Cranston in 1980 who ran them for the next 13 years, and although never being in charge Dr and Mrs Brook made a huge contribution.  Also in 1980 the first coach party booking was received for 50 persons and about the same time catering for events such as birthday parties, wedding receptions and funerals was introduced.  The price was increased to 75p for a cream tea or 45p for a plain tea.

v   Over the years demand for the teas gradually increased, and many local people, both church members or from the local community volunteered, to help either by baking or serving, and the church recognised that the teas were a great service for the many visitors to Marwood, helped the church finances, and helped to establish Parish contact through the helpers.

v   In 1993 Alison James took over and the teas went from strength to strength, making over £9000 a year on several occasions in the 1990s and became quite a local institution.   So much so, the teas featured in a TV series and book by Sophie Grigson ‘Feasts for a Fiver’ in 1999.

vIn 2003 the charity ‘Friends of Marwood Parish’ was established under the leadership of Rosemary Corner, with most of the funds going towards maintaining the fabric of the church, but with discretionary donations to other local charities including Children’s Hospice South West and North Devon Hospice.

v However, after the death of Dr Smart in 2002, Marwood Hill Gardens needed to be run on a more commercial basis and a tea room was opened in 2003, which inevitably led to fewer customers for the cream teas and at the same time it was becoming more difficult to recruit volunteers so the charity was wound up at the end of 2012.

v   The church then took over serving the teas again on a somewhat reduced scale, and latterly mostly Sundays and Mondays on bank holidayweekends plus Sundays on a few other selected dates starting usually on Mothering Sunday and finishing at the end of September, with inevitably a reduced but still useful income.

v   We had just started planning for the 2020 season when Covid struck and no cream teas were possible last year.  Similarly lockdown meant we were unable to plan for 2021, but as a one off initiative we did pre-ordered takeaway cream teas on Sunday 30th May (Spring bank holiday weekend) which were quite popular, and may do one or two sessions in the hall at the end of the season.  Also, catering for small events is still available.

v   Over the years, as well as the Sophie Grigson book, several versions of the Marwood Tea Ladies Recipe book and other items such as aprons, tea towels and vouchers have been available for sale.  Memorably, a calendar for 2010 was produced featuring a number of helpers wearing nothing but their aprons with the help of Graphics students from North Devon College (now Petroc).

v   The future?   This is uncertain – it would be great to have a full season next year but the current helpers are all getting older and fewer in number and we really need new younger helpers so would be very pleased to hear from anyone who would like to join us. 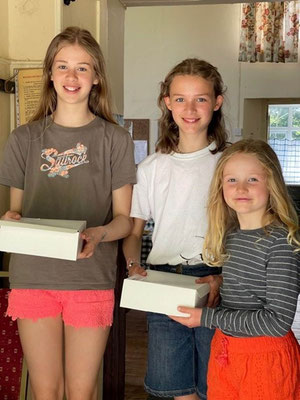 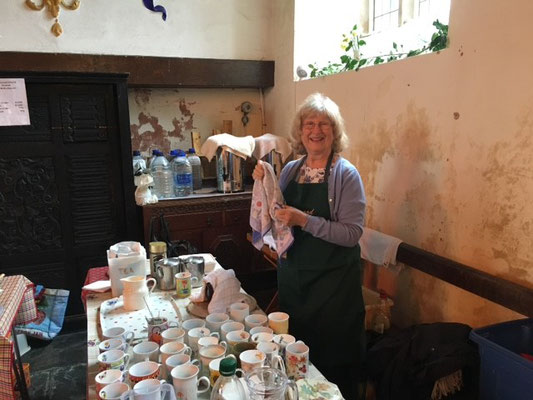 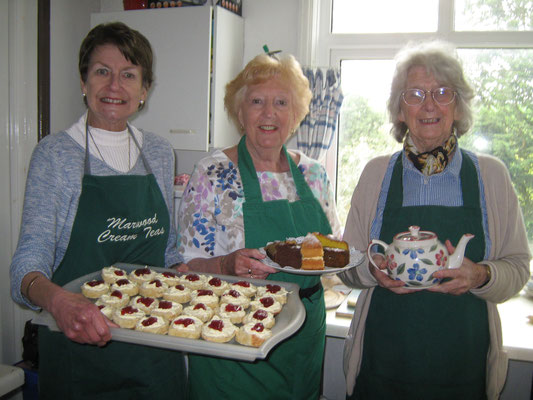